How to fund a business with crowdfunding 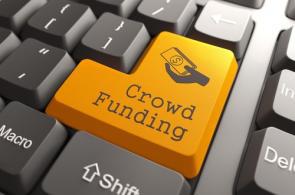 As crowdfunding platforms take off, many entrepreneurs are starting to turn to these resources to get their businesses off the ground. Angel investors may not always want to gamble on new products, and securing a business loan can also be difficult. However, crowdsourcing enables entrepreneurs to collect smaller sums of money from a larger number of individuals, which can provide enough funding for a business owner to get started. This is especially good if you need a loan but have little or no credit history. The only downside is that the crowdfunding campaign could potentially be a failure, in which case, the entrepreneur is back to square one.

Between 2011 and 2013, the crowdfunding economy has more than tripled, increasing from1.5 billion in 2011 to 5.1 billion in 2013, according to an infographic from Clarity. As the years go on, this number could rise since President Barack Obama signed the Jumpstart Our Business Startups Act, which allows crowd funders to gain a maximum of $1 million through such platform, Small Business Administration reported. This may mean that businesses will also be able to use crowdfunding to sell stock, but the final rules have not yet been released. However, there are platforms that allow crowdfunding from accredited investors with more than $1 million in assets, such as Grow Venture Community and MicroVentures.

What exactly is crowdfunding?

Platforms Indiegogo, Kickstarter, Fundable and others all allow people to raise money for various causes. Some are more related to charity, while others are more geared toward arts or entrepreneurship. In general, the basics are the same for each. Someone sets up the platform, which asks users to contribute funds in exchange for some kind of reward. Then, campaign makers set up different levels with increasingly enticing reward options. A gift of $20 may yield a branded mug, for instance, while a gift of $1,000 or more could provide funders with VIP access to an opening party. Using the platform, entrepreneurs communicate their project in a way that will encourage people to fund it.

How to fund a project using crowdfunding

There are a growing number of platforms on the market and depending on your product, different ones may work better than others. Indiegogo allows anyone to fund any sort of project, but it initially was launched to focus on film. Peerbackers and Fundable are sites that focus on businesses and entrepreneurs. Fundable actually gives businesses a choice of whether they want to raise funds from accredited investors or peers. While Kickstarter is the most prominent of these platforms, it cannot be used to launch businesses, but it does accept individual products. This list on Crowdsourcing.org can help you find the right resource for your business.

Many platforms also have submission requirements, which means it could take several days for your request to be processed. To meet the platform's guidelines you may be required to change some aspects of your campaign.

Remember that most crowdfunding platforms will take a percentage of your earnings to keep their own operations moving. Others, like Fundable, require a flat-rate fee. According to Forbes, you also need to remember that you may need to pay taxes on your earnings. Calculate everything to make sure that the endeavor will be worthwhile.

The rewards you choose will also be a cost to consider. From preparing the gifts to shipping them, processing these once a project is funded will take significant time, energy and money.

It's also important to carefully consider the fundraising goal. Business owners may choose to fund one phase of development rather than attempting to raise everything they will need at once. Once you've achieved initial success, you can even do another round of crowdfunding.

Getting people invested in your project is generally considered the most effective way to get them to contribute, and telling a story is often the best way to get a consumer's attention. A good suggestion is to pitch your product around the problem it solves, rather than simply touting the benefits. How can you tell the story of your product effectively? Visual media is the most popular method. Create a video that demonstrates what your product will do and take photographs. A combination of both may best help to portray what you are trying to do. Basically, you need to make sure people have an understanding of what your product does and why it would make a difference in the world.

You can't just rely on word of mouth to inform people about your efforts. Most business owners need to put in a lot of time promoting the campaign. Often, this starts with your own personal network. Make sure you have a group that is willing to invest in your project and spread the word. After that, you'll need to put in many hours on social media and other digital marketing efforts to make sure your campaign sees as many eyes as possible.